Alive and Well: The Legacy of C.J. Henderson

Browse: Home » Alive and Well: The Legacy of C.J. Henderson

Alive and Well: The Legacy of C.J. Henderson

Taken from us in his creative prime, author and novelist C.J. Henderson passed away on July 4, 2014, after a long battle with cancer. A writer of science fiction, fantasy, horror, and detective thrillers, C.J. was hard to pin down to a single, specific genre, and there-in lies a clue to his soul, for he was a man of many talents, many interests, and of course, many dreams. In the vast world of publishing there are a wide variety of author types: those who love the monastic life of keeping to a small room and penning tales with little interaction with the outside world, those who choose to balance the writing life with interacting with fandom, and finally, those like C.J., who while a prolific writer, absolutely LOVED his fans.

C.J. Henderson was in every sense of the word, a Huckster. He was a salesman extraordinaire, a man who never shied away from The Pitch, and in his prime excelled at attending dozens of conventions and events in the span of a year, making new friends and fans, and spreading the gospel of his magnetic personality.  To meet C.J., to talk with him, was to become a part of his world, a part of his writing, because it was all One. C.J. himself was as daring, witty, confident, outspoken, eclectic, and charming as any of the many wonderful characters that appeared in his short stories and novels. To share a drink, a joke, a meal, and a laugh with him was to take a short vacation in the universe C.J. created out of the magic and mystery that was his mind and soul. 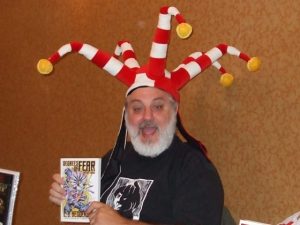 The one positive note that slowly floats above the dark tragedy that was his death, is that his works live on, for one and all to read. In fact, not just the precious writings he had published and shared with the world during the course of his life, but a number of projects (shared anthologies, short stories, and novels) that were either unfinished, or had not yet found a Press to put them in print.

In the final months before his death, C.J. communicated with Copper Dog Publishing LLC and asked us to finalize and publish four projects that he held dear under our MoonDream Press imprint. The first of these, COWBOYS IN SPACE, is a Shared-World novel that recently went to print as a trade paperback edited by Mike McPhail and featuring short stories by C.J. Henderson, Bruce Gehweiler, James Chambers, Robet E. Waters, and Jack Dolphin… and we are proud to announce that it is now also available in e-book form on Amazon Kindle. 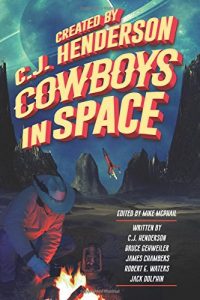 Please note that the next C.J. project we will be publishing is the novelette, JAC AND HER BEANSTALK, a tale for children that will be published under our Pumpkin Hill Press imprint in the near future. Stay tuned for further updates.

Although C.J. Henderson has left us, his voice is still alive, his imagination as fertile as ever, his humor still daring, and Copper Dog Publishing will be sharing it with the world in the months ahead.