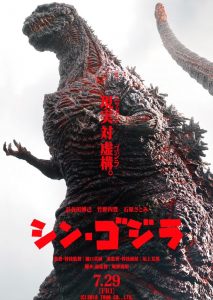 This was less of a monster movie then an exploration of how a bureaucracy copes with a crisis. For me, interested in all things Japanese, the movie was enjoyable and I found the background fascinating. For those looking for a standard Kaiju movie, they may find this film deficient in action and wonder why we spend time in a long series of meetings about rampaging monsters in Tokyo. But this is actually the most intensely realistic part of the movie as the government deals with everything from refugees, to the internal issues of which bureau has to respond to what crisis, through the careerism of self-interested officials and the fall of the yen as markets around the world lose faith Japan’s ability to cope with a crisis.

For a student of Japanese history (I recently finished the Pulitzer Prize winning “Embracing Defeat” by John Dower the occupation 1945-1953) there were many telltale signs and hints of that period. The motto, Scrap and Rebuild, was referred to at the end of Godzilla. This was a motto of the government after the Second World War when tanks were turn into tractors and airplane seats into furniture. Much was made of Article Nine which prohibits the use of armed force by the Japanese government. This was added to the rewritten constitution (replacing the Meiji constitution) by the occupying powers.

The complicated relationship between the United States and Japan is also highlighted in the film. There are resentments expressed about the colonial or tributary relationship of Japan to the United States (without any reference to the circumstances that gave rise to that relationship.) Yet the country that contributes the most to the battle against Godzilla is the United States, sending B-2s and drones to fight the great beast. Only the US attack with a bunker busting bomb actually hurts Godzilla. The beast then goes into hibernation which makes one wonder why he wasn’t then attacked with second bunker busting bomb while helpless, probably the biggest flaw of the movie. 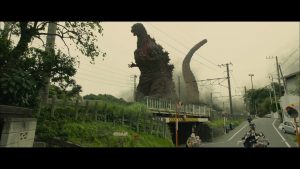 For all the assistance the US provides, the shadow of Nagasaki and Hiroshima is never that far away. The US and UN begin a countdown to the nuclear attack on the stationary Godzilla as he hibernates in downtown Tokyo. The Japanese must come up with their own plan to save both their country and national honor. Fortunately the “Young Turks” who have replaced the literally vaporized prior government are up to the job.

The movie is an interesting journey into the Japanese psyche and the problems of an intensely bureaucratic government and society, in which true responsibility is very rarely shouldered by the wielders of power. While apologies are often offered in Japanese culture, almost as the oil that makes society function, apologies by officials and executives are often for show and the same parties quickly return to power in other guises. Such a sentiment is often at the base of Japanese films. The true powers operate from the shadows manipulating those apparently in power as their surrogates.

The film does posit that a new generation of Japanese are rising to take power and that they will be more cooperative, more pragmatic and more effective than the old guard which muffs the response to the threat. There is also a nice implication about the US, our representative is an Asian woman who everyone expects to rise to the US presidency, making the interaction with the young man who will eventually head the Japanese government rather more hopeful then it may have seemed. 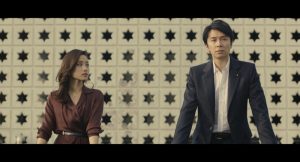 Those looking for something like Pacific Rim or the American Godzillas made prior to this movie maybe disappointed. It is more of a thinking person’s piece and in the end maybe most satisfactory because it is as quintessentially Japanese as was the original movie