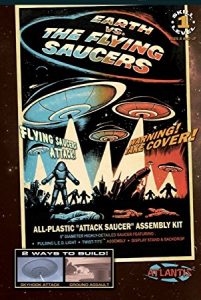 Following on my discussion of ARRIVAL, I updated an article that was published in the Science Fiction Writer’s Bulletin on First Contact.

This has been handled wonderfully as in Ray Bradbury’s “It Came from Outer Space” and miserably as in an episode  “Star Trek- Enterprise” when Captain Archer, informed that an alien ship was approaching, idly deferred the meeting of civilizations to a subordinate. After I finished howling abuse at the screen for the unpardonable sin of making first contact boring, I forswore any further involvement with the franchise. Little did I realize that later offerings wouldn’t even make that standard.
Carl Sagan and others testified that the technological achievement of crossing interstellar distance would be matched by a spiritual growth that would make conflict unlikely. He also believed there would be no practical military or economic way for war to be waged given the immense distances. While the vast reaches of interstellar space are immensely more challenging then the air or sea , it must be noted that we have fought in every medium we have ever encountered. Mankind is not simply a logical or economical creature, and indeed, wars among our species are far more often started for reasons of religion, race, and culture then through any cool, rational analysis of goods wagered and material and life lost. Hitler declared war on us not because he was obligated to do so (or felt any obligation to honor the Tripartite treaty) he was simply that contemptuous of American fighting ability and staying power. So while it will not be easy for first contact to occur, or for conflict to come from it, bad karma may find a way.
First Contact in SF usually means conflict, either by misadventure, or failure to communicate. In Larry Niven’s brilliant “Footfall” we are attacked because the aliens evolved from herd animals, and assume that on the meeting of two herds there will be a battle and the loser will then become part of the victor’s herd. 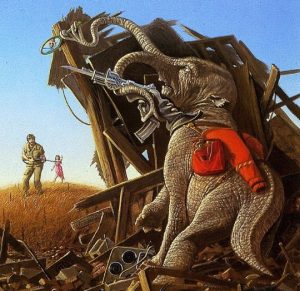 Their surrendered soldiers assume that they are part of the human herd now and work for us. They simply cannot understand why we won’t allow them to become part of the human herd. Biology has made their actions, which are nonsensical to us, imperative to them. With them it’s attack first, talk later and there are no recriminations because we are all one big happy herd now.
Niven has given us plausible aliens in a greater array and with more originality then any other writer (in my humble opinion), from: Puppeteers, Slavers, Bandersnatch, Trinocs to Protectors. While First Contact was rarely the subject of his work, it was brilliantly handled when pacifistic humans met carnivorous aliens called the Kzinti, who evolved (or in his later work are revealed to have been tampered with) from something like a felinoid hunting animal. Niven didn’t settle with making them big cats. He works out the psychology of creatures that see life as divided into predator and prey. A Kzinti will kill you for smiling at him; it would never occur to him to bare teeth in friendship. All his relationships are expressed in domination. Even more unusual, only the males of his species are sentient. It won’t occur to him to chat up Madeline Albright. 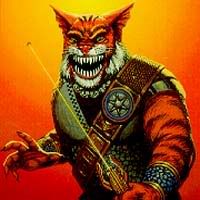 Niven and Pournelle create another alien culture in the “Mote in God’s Eye” where creatures are so at the mercy of their biology that it determines their history and fate in a never-ending cycle of boom and bust. What we do with machines, they do with evolution. Woe to us if they ever get out of their home system. 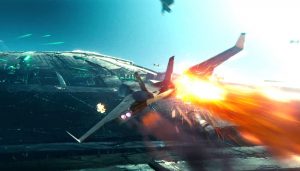 In a lesser effort, “Independence Day,” the aliens are xenophobic locusts and the attack is brought on because they are migratory, seeking resources, and other life forms are merely targets. It may be that they do not have a word for friend. Certainly the concept does not appear to exist outside their species. Hostility is immediate and without quarter. Similarly in the various versions of the HG Wells, “War of the Worlds” in book, audio and video and in the versions of Campbell’s, “Who goes there?” AKA the “Thing” first contact merely means attack. We are too different to have anything in common but to act as a food source for the hostiles.
Andre Norton often depicted such aliens, positing that some creatures would have such radically different ways of thinking and being that to merely consider them would drive humans mad, as in “Inherit the Stars.”
Particularly upsetting is Ridley Scott’s, “Alien.” 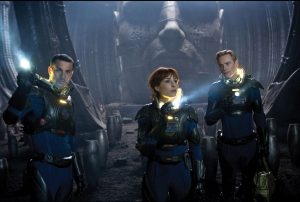 First contact with this creature consists of being raped then murdered as a food source for its young. It’s unclear if the aliens are sapient though they, in the adult stages, exhibit degrees of intelligence. I think they were someone’s bio-ordnance that got loose and I hope it ate their butt first. I think that in Prometheus with Noomi Rapace that is confirmed in the latest edition of “More stupid human tricks” or “The Expedition that couldn’t think straight.”
CJ Cherryh is one of the greatest sociological and anthropological creators of aliens. Her creatures THINK alien even if they usually look like us. She created the Iduve, for whom the words “help” and “hurt” mean essentially the same thing. They exist in a society somewhere between a wolf pack and feudal Japan. My favorite are the Mri, absolutist aliens who are incapable of change and have thus remained culturally intact through uncounted ages.

The Regul are ugly mercantile aliens who casually destroy and torment their young. The Atevi, who have no word for friend or love, only manichi, a complex web of obligation and social interactions that sometimes functions the same as love and friendship and sometimes leads humans into the dangerous gulf of alieness because it is neither of those emotions. 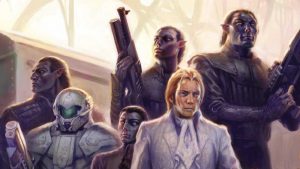 Cherryh deftly creates aliens who you can insult merely by existing, or love, even while knowing that, while they will die for you (as in the case of Jago the Atevi bodyguard and Bren her human diplomat charge in the Foriegner series) they are incapable of loving you back.
Her catlike aliens are not as much fun as Larry Niven’s Kzinti, but her depiction of a feline society is interesting. She deals with an alien society beyond the warrior stage, begging the question: are there alien accountants, insurance adjusters, used car salesman? “In the Pride of Chanur,” males battle for harems of hard-working, starship-running female traders. “Pride” has a double meaning in this title. First contact with humans sets the wheels in motion for one canny trader to remake her civilization when she decides she likes her male, doesn’t understand why he should die and she should become chattel to some younger stud.

In terms of the awesome effect of First Contact, CJ probably takes the prize. No one else so clearly conveys the sociological effect of first contact. One society or both will be drastically and permanently remade or possibly destroyed.

“Look to your skies for a warning,